Salomon Santos is a gifted artist from Tamboril, Puerto Plata. He`s based in Sosua Beach, on the Gregorio Luperon street that leads to the beach`s main entrance. This street is lined up with gift shops and artists shops, a perfect location for tourists to see local art being created when walking to the beach . His art is a voyage through various stages of historic and social changes in the local and international scene.

When we walked to his atelier we found art inspired on international music legends such as Prince, Mick Jagger, Bob Marley, the Jackson Five, Miles Davis and several others. There was also a perico ripiao, a colorful painting depicting merengue musicians that often entertain tourists in Sosua Beach.

He previously exhibited at the Sosua Casa De Arte Art Center, and the collection on display was his vision of the colorful marine life in Sosua bay: turtles, crabs, corals, tropical fish. There was also a sense of awareness in the collection that felt like a protest against plastic in the oceans. 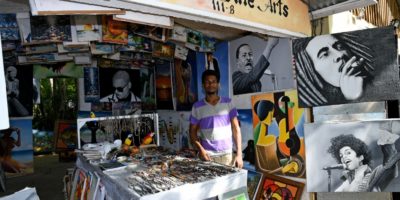 Michel Fine Arts in Sosua Beach is an art gallery that displays art for sale from many ...
By ConciergeSeptember 13, 2018
Art Shops 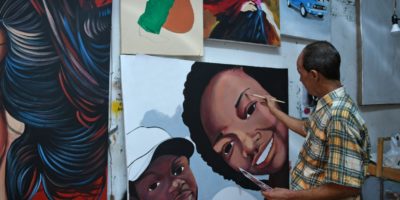 Joel Rodriguez  was born in Santo Domingo, in 1962. He has been living full time in Sosua ...
By ConciergeSeptember 13, 2018
Art Shops