Sosua Beach has a long history dating back to the early twentieth century, (1903 ) when the United Fruit Company established a banana plantation in the lands surrounding Sosua. There was also a shipping dock in what is now the Sosua Bellamar Resort ( still the pier mooring foundation pillars –the pilotillos– are visible, if only the top of one buried in the sand ).

About 17 ships a year would dock and carry the precious cargo to Europe and the U.S. from Sosua bay, an operation that ended in 1916. The beach by then had a hotel called Garden City, barracks and some 20 houses and facilities that were left from the UFC operations. During the 1920`s, several families from Santiago used the homes as vacation getaways when visiting the beach.

A few years later, Nazi Europe was persecuting the Jewish people, and the only country in the world that was willing to take them as refugees was the small island of Dominican Republic, by then ruled by Dictator Rafael Trujillo. A New York based Jewish foundation named DORSA agreed to buy land from Trujillo, the same land that was once used by the United Fruit Company ( see history of Sosua ).

VIDEO: Sosua, haven in the Caribbean

Once settled, The Jews had to overcome the hardships of land and cattle chores under tropical weather (most of the refugees were educated intellectuals, no farmers ). Eventually they prospered into an exemplary community of successful businesses, specially in the dairy industry.

During the early 1980`s, the Dominican Republic began to designate coastal beach areas to promote the island to international tourism, and Puerto Plata was the first to develop the infrastructure of beach resorts. Soon Sosua beach evolved into a high valued beach destination that would be considered a top choice in the DR and the Caribbean. 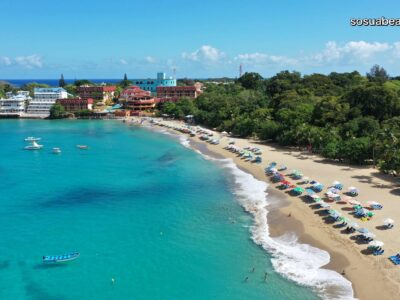