Considered one of the most beautiful fish in the Caribbean, Holacanthus ciliaris, or Queen angelfish is for sure one of the favorite species for divers. They get their name from the blue ringed black spot on their heads. Some also call it blue angelfish or queen angel, and might confuse it with a close relative from Bermuda called Holocanthus bermudensis, but they are two separate species.

Queen angelfish start very different as we see them as adults, and some people might not recognize them at all. Juveniles are dark blue with yellow lips, gills; also vertical bars ( light blue to white ). This is standard nature camouflage to blend the young with the reef background. Adults are blue to green, with yellow-rimmed scales; They sport yellow pectoral and ventral fins, with lips and fins edges in dark blue.

Holacanthus ciliaris is common to reefs in the Western Atlantic and the Caribbean; Florida ( specially the keys ), the Bahamas, Gulf of Mexico and other areas such as the Bermuda Triangle and Brazil. They can easily be seen off the North Coast of the Dominican Republic, as reported by diving centers from Sosua and Puerto Plata. They are known to change colors when sensing danger, and are considered shy, seen alone swimming near the tropical reefs from 1-70 meters depths. 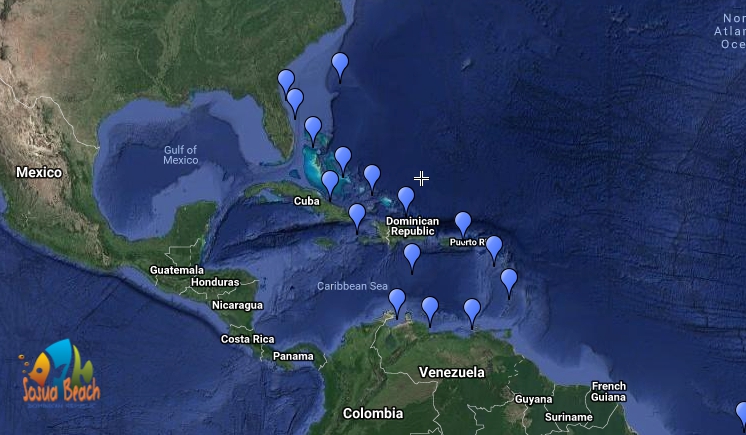 Queen angelfish feeds on sponges, jellyfish,  hydroids, bryozoans, algae, plankton and tunicates. Early in life they act as cleaners for other larger fish. This is a preferred fish in many personal aquariums, where they are fed a diet of algae and meat based foods.

This fish is considered monogamous, as it has been observed to form a long term pair relationship. Queen angelfish reach sexual maturity at 22-24 cm in size. Fertilization is external, meaning they are a substratum egg scatterer.

They mate bringing their bellies together and releasing a cloud of sperm and thousands of eggs. The transparent eggs are pelagic, and float in the water column for 15-20 hours before hatching into larvae that feed on plankton. After about 30 days the juveniles settle on the bottom.